As a corporate group operating a logistics business, the SG Holdings Group as a whole emitted 412,196 tons of CO2 in fiscal 2019, and recognizes the impact we have on climate change. Meanwhile, in the medium to long term, we believe that climate change will have an extremely large impact on the continuity of business, such as stronger environmental regulation and an increase in disasters due to climate change.
For this reason, in accordance with our Environmental Policy, we have engaged in a variety of initiatives such as promoting the use of vehicles and logistics facilities with lower energy consumption and emissions of greenhouse gases, and limiting the use of energy in business facilities as initiatives leading to the reduction of CO2 emissions in business activities.Additionally, we have included climate change as a risk management item, and we conduct an assessment of the risks annually.
In addition to continuing these initiatives, we also began supporting TCFD (Task Force on Climate-related Financial Disclosures) in fiscal 2019. In the future, we will analyze the impact of climate change on the Group's finances, and utilize the resultant risks and opportunities in our business strategy.

Please see the following webpage for more information on the structure:
http://www.sg-hldgs.co.jp/en/csr/mission/responsibility/governance/

Climate change risk is incorporated into the Group's risk management and assessed annually.

The results of initiatives implemented in FY2019 were that both Sagawa Express and SG Moving achieved the targets they had set for reductions in CO2 emissions. We are moving forward with reductions in CO2 emissions on both the hardware side, through continued deployment of environmentally friendly vehicles and conversion to LED lighting, and the software side, through modal shifts and improvements in transportation efficiency.

Measures to Adapt to Climate Change

Sagawa Express is adapting to climate change. The company has adopted quick-dry uniforms and half pants to prevent heatstroke, and is also investing in air conditioners and fans in sales offices. Furthermore, a BCP assuming the occurrence of disasters has been established as a measure to adapt to disasters including climate change. Effective measures are being implemented, such as the creation of BCP charts for sales offices nationwide and the deployment of four power supply vehicles in case of power outages. In addition, focus is placed on BCM initiatives such as introducing a "disaster response decision support service" utilizing climate data and implementing disaster drills assuming the occurrence of flooding.

Sagawa Express has concluded disaster agreements with the national government and local governments. In the event of a disaster, the company provides cooperation such as transportation of emergency supplies to evacuation centers and the handling of goods at supply centers based on the agreements. With regard to responses to disasters caused by the impact of climate change, Sagawa Express is proceeding to conclude disaster agreements with the national government, local governments nationwide and universities because greater coordination with local governments, etc. is essential for quickly conducting disaster relief activities utilizing the disaster response experience accumulated by the company.

Sagawa Express is also participating in a variety of external groups and projects to perform communication. The company participates in the Japan Climate Leaders Partnership (JCLP) as an executive member, providing the Japanese government with recommendations on the issue of climate change through dialogue with government officials, policymakers and industry groups. In addition, the company is also acting as member of the Logistics Environment Measures Committee of the Japan Association for Logistics and Transport and a supporting member of the Japan Climate Initiative.

JCLP's Dialogue with the Government and Policymakers and Policy Recommendations

February 13, 2019
JCLP conducted dialogue with State Minister of Economy, Trade and Industry Seki to convey expectations of companies facing the carbon-free transition in the national policy on carbon-free business.
April 23, 2019
The JCLP published an opinion based on the proposal made to the Japanese government by the Roundtable for the Long-term Growth Strategy under the Paris Agreement.
September 19, 2019
The JCLP issued a statement of support for the UN Secretary-General's Call at the Climate Action Summit and sent it to Secretary-General António Guterres.
October 23, 2019
The JCLP held dialogue with Prince Charles during his visit to Japan. Sharing its philosophy of becoming companies required for the transition to a carbon-free society, the JCLP has partnered with the Prince of Wales Corporate Leaders Group (CLG), which Prince Charles serves as a patron, for a decade.
November 29, 2019
The JCLP issued a position statement on Japan's Nationally Determined Contribution (NDC) to reduce greenhouse gas emissions and sent it to the relevant ministers, calling for the government to enhance its 2030 emissions reduction target in line with the 2°C/1.5°C target.
June 25, 2020
The JCLP held dialogue with Minister of the Environment Koizumi. It proposed a specific green recovery such as the introduction of policies for the realization of PPA in Japan.
July 10, 2020
The JCLP held dialogue with State Minister of Economy, Trade and Industry Makihara. It proposed specific details of a green recovery such as the establishment of a power transmission and distribution network contributing to large-scale introduction of renewable energy, corporate PPA promotion measures and carbon pricing.

The Group is working to reduce CO2 emissions throughout the entire transportation/delivery system. For example, transfer centers and Sagawa Distribution Centers (SRCs) are utilized to promote the improvement of logistics efficiency by limiting the number of trucks used.

The establishment of transfer centers can reduce the number of trucks used.

SRCs are distribution facilities directly connected to the sales offices of Sagawa Express, and enable the reduction of truck transportation between each process.

Sagawa Express has established Service Centers (SCs) that perform collection and distribution with hand carts or bicycles, instead of using trucks, at approximately 340 locations throughout Japan (as of March 31, 2020). With three to five fewer trucks run by each location, CO2 emissions and other air pollutants of 1,500 vehicles in total are reduced across all of these Service Centers.

If a Service Center has been established 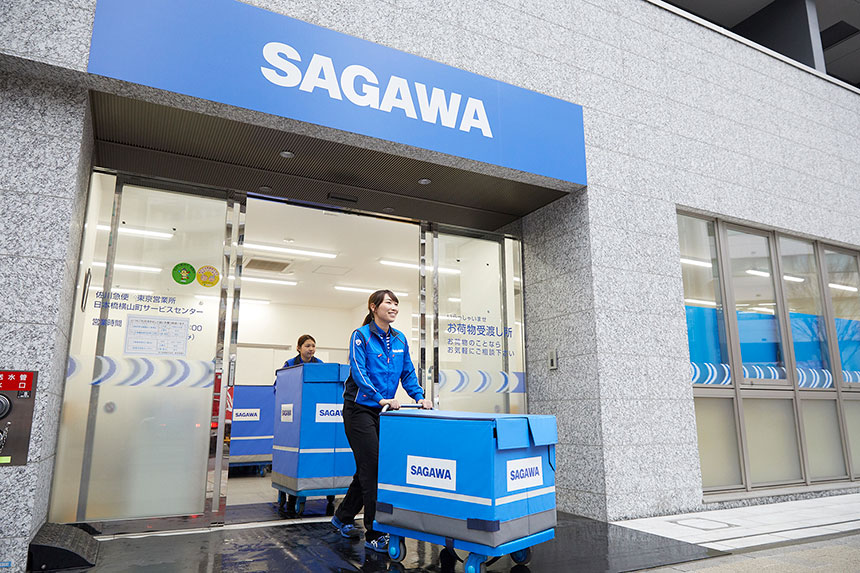 Sagawa Express has implemented Idling Stop since 1997. When drivers are away from their vehicles while delivering and collecting to and from customers, and when unloading packages in sales offices, the key is removed from the ignition to stop the engine in an effort to reduce emissions.

The Group is promoting the introduction of environmentally friendly vehicles such as electric vehicles, hybrid trucks, natural gas trucks, and clean diesel vehicles, which have a reduced impact on the environment. In April 2019, trial operation of electric trucks began in the Bunkyo Sales Office of Sagawa Express. Natural gas trucks reduce emissions such as CO2, NOx (nitrogen oxide) and PM (particulate matter), and hybrid trucks and electric vehicles are able to reduce fuel consumption.

Since June 2018, Sagawa Express has been cooperating with field trials of large LNG (liquefied natural gas) trucks jointly developed by Isuzu Motors and Shell Japan in a first for the transportation industry in Japan. This will enable LNG trucks to reduce CO2 emissions by around 10% compared to ordinary diesel trucks.

In August 2020, Sagawa Express fully launched the TRIKE CARGO towing-style electric power-assisted bicycle, a technology the company began testing in March 2019. The bicycles have a maximum towing capacity of 150 kg*, about one-third the capacity of a light truck, making it possible to carry large volumes of packages at a time while reducing the burden on the environment and raising work efficiency.

*Tokyo Metropolis and other areas (It differs depending on the ordinance of each prefecture.)

Sagawa Express is promoting a modal shift, which refers to switching from the transportation of freight by truck to the modes of transportation that have a lower environmental impact, such as train and ship. Modal shift not only reduces CO2 emissions but also contributes to saving energy and labor because a larger volume of freight can be transported at once.

In 2004, Sagawa Express began to transport express delivery packages via "Super Rail Cargo" express railway container cars developed jointly with Japan Freight Railway Company. Trains run regularly to and from Tokyo and Osaka and transport roughly 10% of the total shipping volume between Tokyo and Osaka. The total volume transported in both directions is equivalent to 56 ten-ton trucks.

We are engaged in replacing a part of the long-haul transportation from Kanto to Kyushu, which has mainly relied on trucks, with marine transportation. In fiscal 2018, the "Modal Shift Utilizing Marine Transportation" implemented with the cooperation of MOL Ferry Co., Ltd. and Daito Jitsugyo K.K. was approved as an efficient and environmentally friendly action pursuant to the Act on Advancement of Integration and Streaming of the Distribution Business. This has had the effect of reducing CO2 emissions by 52% and drivers' driving time by 90% compared to before the implementation of the modal shift.

SG Realty develops environmentally friendly logistics facilities with the aim of contributing to sustainable urban development and realizing a carbon-free society. These efforts include SG Realty Wako (Wako City, Saitama), an environmentally friendly facility with a zero-energy design utilizing energy saving (use of LED lighting throughout the entire facility), energy generation (solar power generation system) and energy storage (rechargeable batteries). Although electricity derived from fossil fuels was used when there was a shortage in power generation due to factors such as insufficient sunlight in the past, the facility realized "zero CO2 emissions" by switching all electricity during shortages to electricity derived from renewable energy* from September 2020.

Energy that is permanently available in nature such as certain earth resources including sunlight, wind power and geothermal heat, in contrast to fossil energy using finite resources such as oil, coal and natural gas.

Sagawa Express is encouraging the introduction of LED lighting at sales offices and large distribution facilities. By the end of fiscal 2019, we had effectively reduced CO2 emissions by approximately 12,000tons (approx. 23,000 MW) by introducing LED lighting at 308 locations (+79 locations year-on-year in fiscal 2019).