Based on the Hikyaku Express service of Sagawa Express, SG Holdings Group has grown by expanding functions in response to customer needs. Whatever the era, while asking ourselves how we can help our customers, we seek to do everything we can without ever forgetting the founding spirit of "Hikyaku no Kokoro" (the spirit of express messenger), and to continue our journey as a company that supports social infrastructure.

From the High-Speed Growth Era to the Stable Growth Era

The Group was founded as a courier business operating between Kyoto and Osaka. At the time it was normal for delivery of small cargo to take a week or more, but it focused on small cargo of companies that emphasized speed, building the prototype for the "takkyubin" service with next-day delivery.

Founder Kiyoshi Sagawa began a courier business in Kyoto, operating mainly between Kyoto and Osaka. "Hikyaku no Kokoro" (the spirit of express messenger) refers to the way he approached his work by thinking of the customer at all times, and doing everything he could on their behalf. That spirit has been passed on to successive generations and continues uninterrupted even today, half a century later. 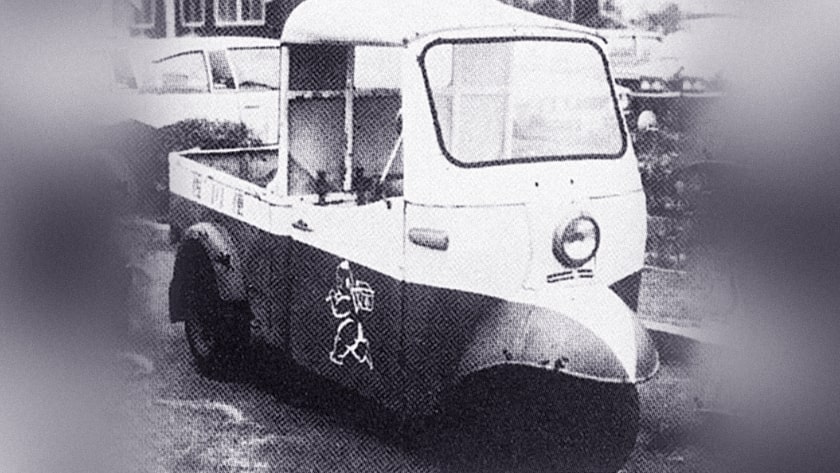 In November 1965, Kiyoshi Sagawa established Sagawa Express Co., Ltd. The three-wheeled light trucks that were used around 1960 could only carry 350 kg, and so the company switched to small four-wheeled trucks with significantly greater cargo capacity.

From the Second Oil Shock to the Bubble Economy

As living standards rose in Japan, the diversification in consumer preferences and needs led to an expansion of the transportation network. After completing a network covering the whole of Japan, Sagawa Express began operation of a nationwide cargo tracking system. 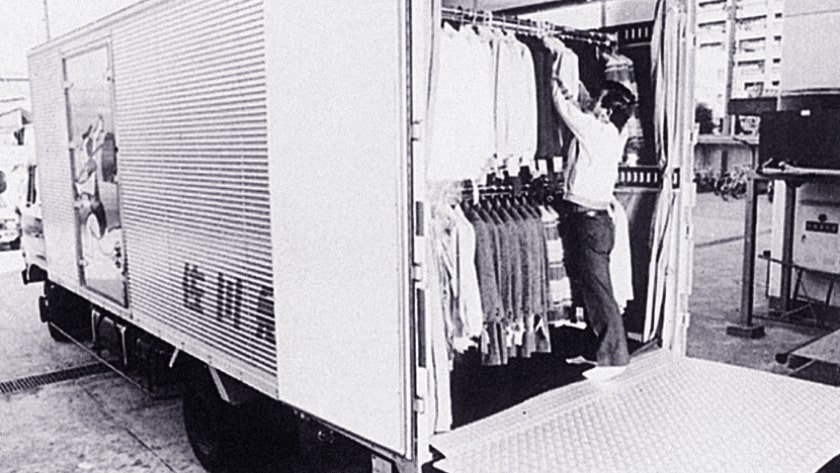 The 1980s was a transitional period for the Group, as it responded to changes in business style by moving from its former domain of "transport business" to "comprehensive logistics company."
This was the golden era of designer brands in the Japanese fashion industry. It was in these circumstances that apparel manufacturers requested a way of transporting garments on hangers without needing to package them, resulting in the launch of "hanger transportation." This, together with other initiatives such as constructing storage warehouses, marked the company's first steps away from transportation only and towards the business of comprehensive logistics. 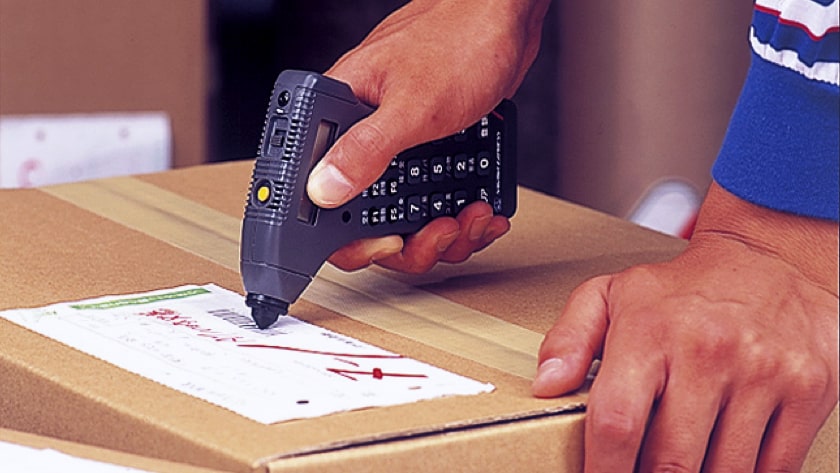 In the second half of the 1980s, daily volume handled exceeded 1 million items. It was computer networks that provided support for transportation and logistics services on such a vast scale. The cargo tracking system was launched on a national scale to make it possible to provide an answer to customers asking for the location of the item for which they were waiting.

From the bursting of the bubble economy to the 1990s recession

In order to respond to the needs of the market, a new Sagawa Express is born.

In the National Truck Driving Championships, the Sagawa Express team claims overall victory for the first time, as well as being awarded the Prime Minister's Award 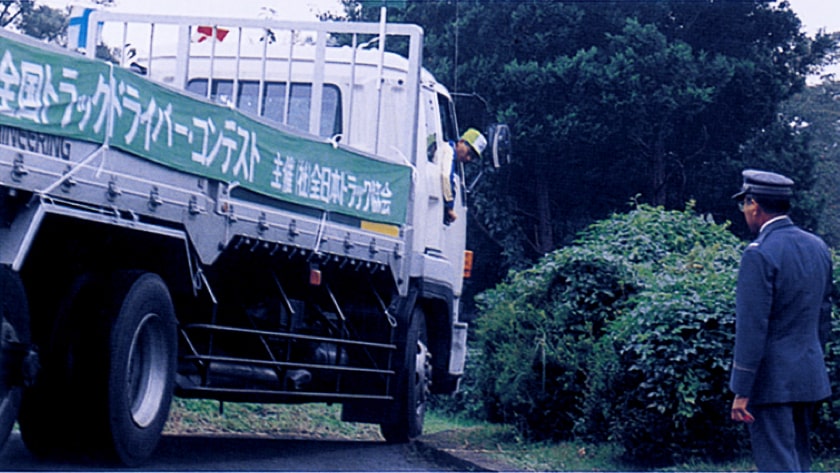 As a result of the continuous implementation of safety-first initiatives, at the National Truck Drivers' Contest National Truck Driving Championships held in October 1989 by the Japan Trucking Association, the Sagawa Express team claimed overall victory for the first time, as well as being awarded the Prime Minister's Award. This result included the first-ever perfect score.

Begins introduction of environmentally friendly vehicles, such as electric vehicles

With the aim of reducing CO2 emissions, the Group bought two electric vehicles for the first time in 1992. After a process of trial and error, it began actively deploying natural gas vehicles in 1997. Since then it has steadily developed its activities, such as by presenting papers at natural gas vehicle research forums, and completing construction of one of the largest private-use natural gas filling stations in Japan. In 2006, it became the first private-sector company to exceed a cumulative total deployment of 3,000 natural gas vehicles. 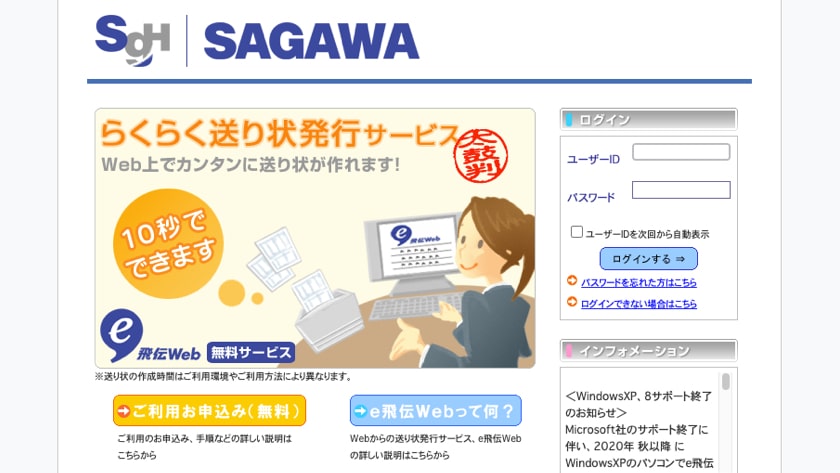 At the beginning of the 1990s, Sagawa Express, which had been on a program of acquisitions, unified system development that had been scattered throughout the various regions.
Against this background, the revolutionary "HIDEN 98" shipping support system was developed to link senders with Sagawa Express online. "HIDEN 98" was subsequently developed into "HIDEN Assist," and "HIDEN BOY" before evolving into "e-DEN" in 2001, and ultimately becoming part of the "e-DEN Web" service. 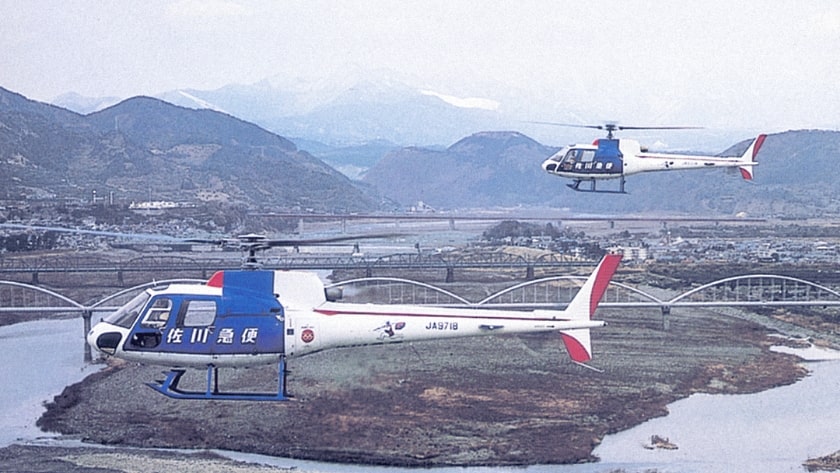 From the IT bubble to the maturing of the IT revolution

(Dawn and growth era of e-commerce)

In order to speed up management decision-making and to enable the organization to respond more quickly to changes in customer needs and in the market environment, the company transitioned to a pure holding company structure. This marks the beginning of SG Holdings. 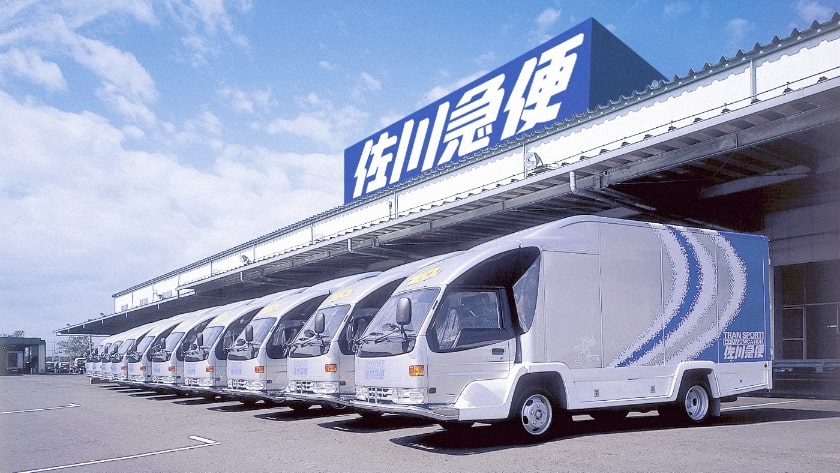 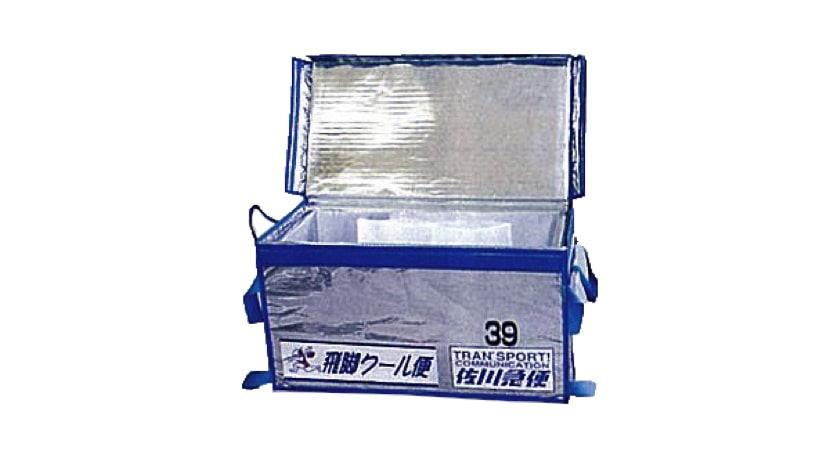 Nationwide roll out of "e-Collect," a cash-on-delivery service that can accept card payments 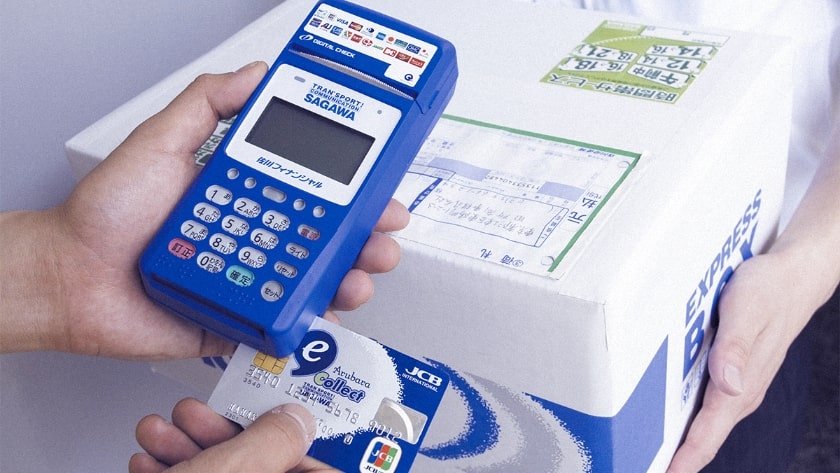 With demand for mail-order rising, "e-Collect" began in 2000 as an evolution of previous cash-on-delivery services, and included the ability to accept card payments. This attracted attention from all quarters, and rapidly become popular. 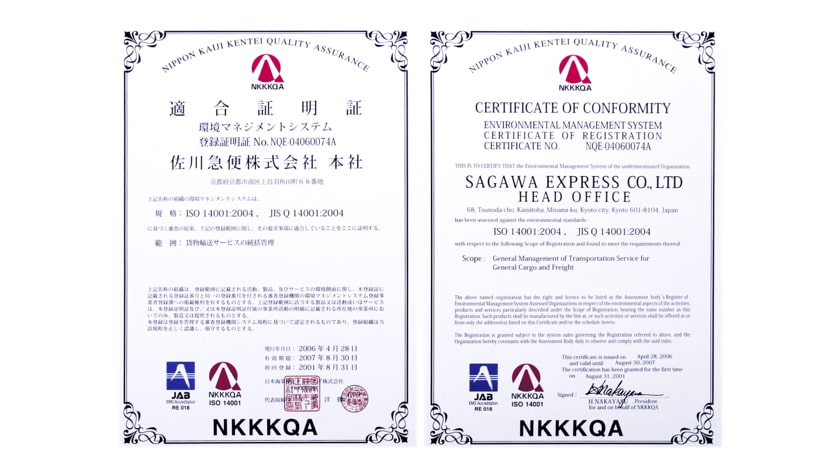 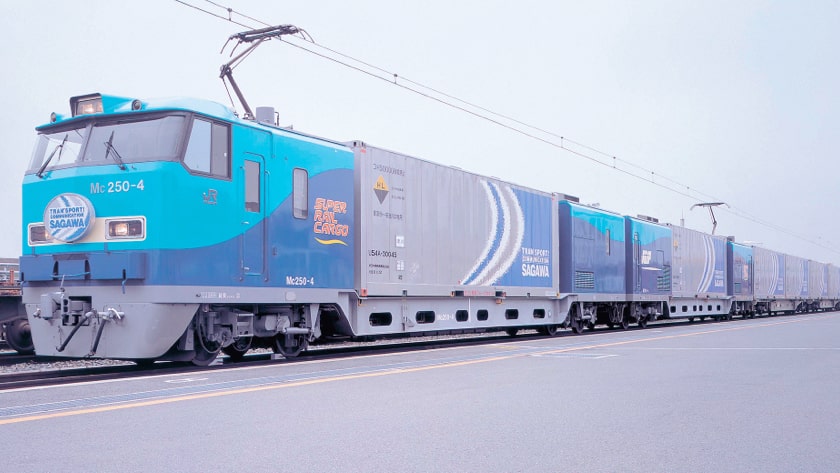 In preparation for promoting the modal shift to railway, Sagawa Express began working with Japan Freight Railway Company to jointly develop express railway container cars. Following on from this, in 2002 it announced its intention to participate in the WWF "Climate Savers Program," becoming the first logistics industry company in the world to do so.
In 2004, the company began operation of the "Super Rail Cargo" service. With the objective of speeding up decision-making in response to the ever-changing needs of customers, a pure holdings company, SG Holdings Co., Ltd., was established to incorporate the functions of formulating and administering management strategy.

From the prolongation of deflation to Abenomics

(era of e-commerce expansion and growth)

As a result of globalization and the growth of e-commerce, companies are facing more complex and sophisticated logistics issues.
Through such initiatives as the launch of the GOAL® advanced logistics project team, and the expansion of the high value-added "TMS" service, the Group has reinforced our structures for responding to the logistics needs of customers. 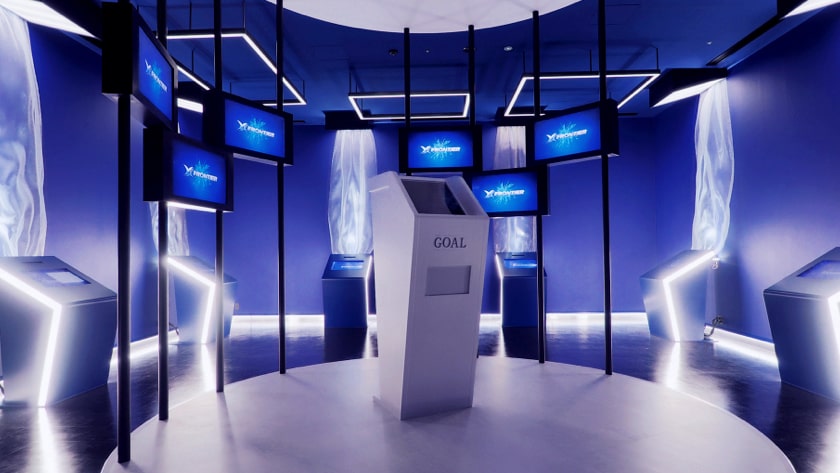 The GOAL® (GO Advanced Logistics) Group-wide advanced logistics project team began operations. This team works on resolving not only the issues right in front of the customer's eyes, but also unearths and resolves potential problems, and proposes optimizations of logistics as a whole.

Listed on the First Section of the Tokyo Stock Exchange 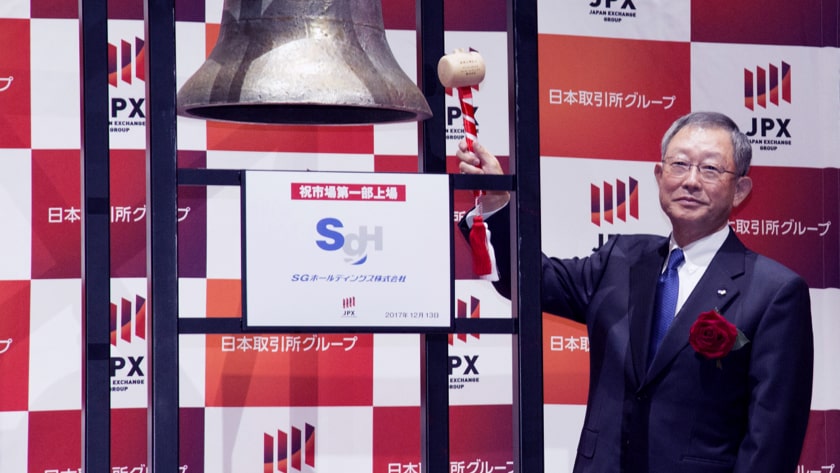 On December 13, 2017, the Group was listed on the First Section of the Tokyo Stock Exchange. 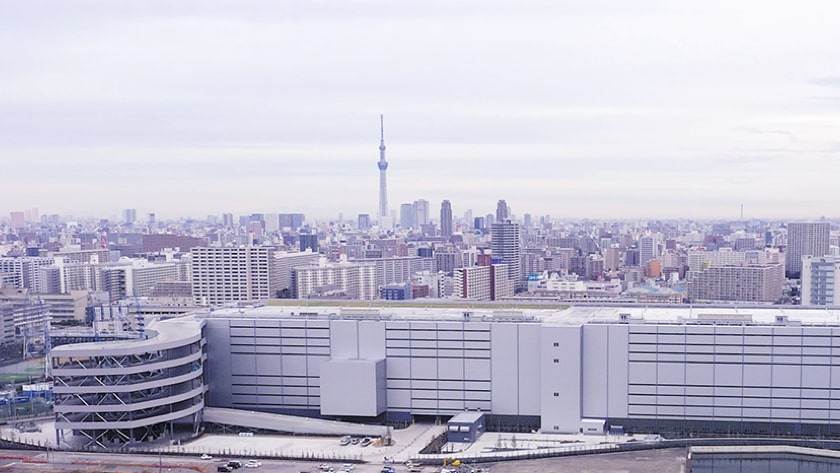 The construction of X Frontier, which combines the large-scale transfer center of Sagawa Express with the logistics functions of the various Group companies, such as EC platforms, international logistics, large/specialized transport, is completed. This facility, which enables the organic blending of the functions of the various companies, is the flagship center of the Group, and has allowed it to further reinforce its structures for supporting the logistical aspects of management issues faced by customers.

The order-made solutions business enabled by GOAL® is expanding. We will strengthen total logistics functions to drive the evolution and transformation of existing logistics businesses. In addition, through redesigning the entire supply chain and actively pursuing the shift to platforms, we will fulfill our mission as a good corporate citizen in the field of infrastructure.